GR 249. Stage 06. Frigiliana - Cómpeta. The village of Acebuchal with the Lucero (1774) m highlighting in the background

GR 249. Stage 06. Frigiliana - Cómpeta. The Moreno ravine and the Cortijo del Daire with the mountain range behind GR 249. Stage 06. Frigiliana - Cómpeta. The path as it passes through the Inn of Candido in ruins GR 249. Stage 06. Frigiliana - Cómpeta. A l limekiln on the edge of the traditional path GR 249. Stage 06. Frigiliana - Cómpeta. Walkers having a break under the large Maritime Pine with Sierra Almijara behind 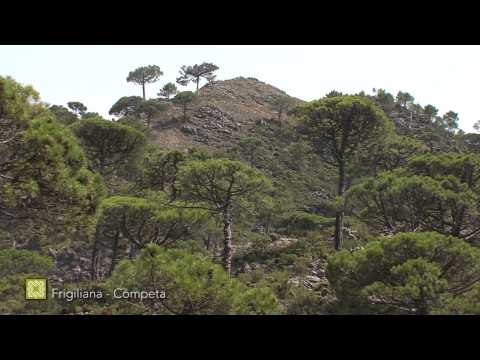 Once you set off on the forest track leading to El Acebuchal, the true woodland begins, where, amongst the Aleppo pines you can see such species as Mistle Thrush, Short-toed Treecreeper, Spotted Flycatcher and Greenfinch, together with Wren, European Robin, Common Nightingale, Blackcap, Cetti´s Warbler, Golden Oriole, Crossbill and Cirl Bunting as you get closer to the stream.

Past the Cortijo del Daire there is a combination of large extensions of broom and scrub where Short-toed Lark and Dartford Warbler breed; this is a good spot to pay attention to the sky looking for raptors. This sierra harbours Northern Goshawk, Eurasian Sparrowhawk, Common Buzzard,  Short-toed and Booted Eagle, and in the cliffs and gorges carved out by the streams, Bonelli´s and Golden Eagle. You can also see Common Kestrel and Peregrine Falcon, generally close to the rock faces, where you can also find Black Wheatear, Blue Rock Thrush and Raven. Watching these species in such rocky environment proves to be especially rewarding for a birdwatcher.

It´s worth mentioning the presence of other species though they might be difficult to see, such as Cuckoo, Scops Owl, Tawny Owl, Eagle Owl, Red-necked Nightjar and Green Woodpecker; in any case these are birds which are easy to identify by their call or song. As you arrive in Cómpeta you are once more surrounded by the typically urban-dwelling birds.