GR 249. Stage 28. Genalguacil - Casares. From left to right, Benarrabį, Algatocķn and Genalguacil from the Alharķa GR 249. Stage 28. Genalguacil - Casares. The ford of the Almanchares River with the rocky spur that causes the meander GR 249. Stage 28. Genalguacil - Casares. One of the ruined houses that mark the way GR 249. Stage 28. Genalguacil - Casares. Casares and the Strait of Gibraltar at the end of the trail GR 249. Stage 28. Genalguacil - Casares. Section that runs along the Mount of the Duke 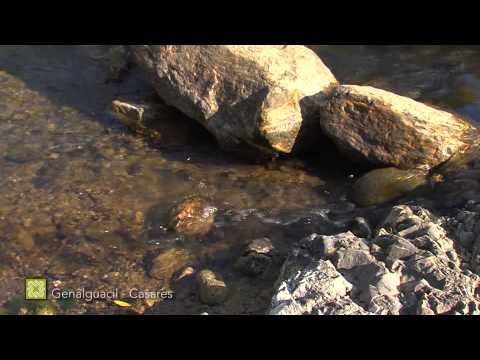 In Genalguacil and Casares you will have a chance to see typical urban birds, while along the entire route forest birds are the predominant type of species. The rivers and streams also contribute their own birds and at the end of the stage cliffs and crags appear, which support breeding populations of Griffon Vultures, among other rock-dwelling birds. The broad views that characterise Stage 28 give you a good opportunity to scan the sky for birds of prey.

The two villages visited at Stage 28 hold a great number of birds, however spring and summer birds are most noteworthy, when you can also see Swifts and Swallows constantly flying overhead. Genalguacil has a remarkable population of House Martins and Barn Swallows and, to a lesser extent, Red-rumped Swallows. Collared Dove, House Sparrow, Common and Spotless Starling are the predominant species in the village, although the diversity of birds which can be seen from the viewpoint (located at the starting point waymark) is very high, thanks to the privileged location of Genalguacil. Without having to leave the village you will be able to enjoy such birds in flight as Short-toed and Booted Eagle, Common Buzzard, Eurasian Sparrowhawk, Northern Goshawk and Common Kestrel, as well as a variety of forest species named below.

Along the watercourses, especially the Almarchal river, such birds may turn up as Common Sandpiper, Kingfisher, White and Grey Wagtail, Nightingale, Cetti´s Warbler and Golden Oriole, among other species. In open spaces where the main type of vegetation is shrubs, you can also see Black-eared Wheatear, Bee-eater and Stonechat. Among the nocturnal species, the Tawny Owl is present and quite common; also Scops Owl and Red- necked Nightjar occur.

Along the stage you will be passing by both ruined and inhabited buildings, and this environment supports Common Kestrel, Little Owl, Red-rumped Swallow, Blue Rock Thrush, Black Wheatear, Spotless Starling and House Sparrow.

The path through the forest of the Monte del Duque can be considered a real treat, since it is a superbly preserved cork oak wood, well maintained throughout the cork harvests. Around here you can also detect by ear the presence of many of the species that have been mentioned previously.

As you leave the Monte del Duque, more varied vegetation appears gradually: oaks, pines, olive trees and some Portuguese gall oak. Soon you will be passing by on your right the vertical walls of Sierra Crestellina and a breathtaking view of the Strait of Gibraltar and The Rock, the Mussa mountain in Morocco, and El Hacho in Ceuta whenever the morning haze clears. The rocky environment begins here and this is where the Griffon Vulture plays the leading role, but you can also see Bonelli's Eagle, Black Wheatear, Jackdaw and Red-billed Chough. In addition, these mountains are one of the few places in the province where you can find Egyptian Vulture during the breeding season.

Once you are in Casares, the castle and its viewpoint are worth a visit, where you can see Lesser Kestrel during breeding season, and, occasionally, in winter. This is unusual as the species normally winters in the region of Senegal and Gambia. Besides the Lesser Kestrels you can enjoy close fly-bys of Griffon Vultures right over the village of Casares, as well as Booted Eagle and Common Buzzard in flight.

This stage goes between the northern foothills of Reales de Sierra Bermeja and Crestellina Mountains. It is surrounded by varied vegetation that, considering the height and humidity of this location, includes many kinds of ferns throughout the year.