GR 249. Stage 32. Ojén - Mijas. The Path through the Sierra de Mijas with the Mediterranean Sea in the background GR 249. Stage 32. Ojén - Mijas. The House of the Cherry tree (Cerezal) among the frond of the Mediterranean forest GR 249. Stage 32. Ojén - Mijas. The Recreational Area of the Llanos de Purla is a prominent milestone of the Path

GR 249. Stage 32. Ojén - Mijas. The fountain of the Cage (fuente de la Jaula) in the heart of Monda and next to the laundry room GR 249. Stage 32. Ojén - Mijas. The orchards of Coķn with the crests of Sierra de las Nieves in the background GR 249. Stage 32. Ojén - Mijas. Curves of the sidewalk in the Sierra de Mijas to soften the descents GR 249. Stage 32. Ojén - Mijas. In some places the pine forest has a high density and large trees GR 249. Stage 32. Ojén - Mijas. Sierra Blanca from the walk with the houses and gardens of Ojén GR 249. Stage 32. Ojén - Mijas. La Fuente del Cabańil at the bottom of the valley and the old mine on the terraced slopes 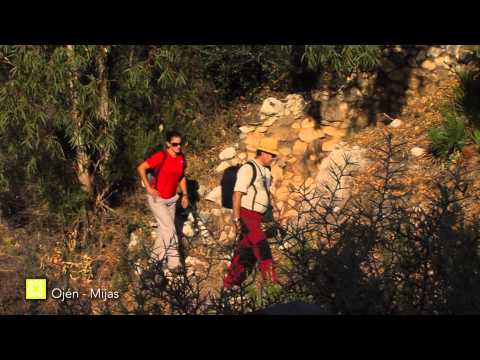 This text, describing Stage 32, would have been completely different if not for the many forest fires which have happened during the recent years, the 2012 being the most memorable due to its magnitude. The fires in the summer of 2014 have also contributed to the changed look of the area. Along the major part of the stage forest bird communities have been, quite simply, ruined, and where there used to be well established populations of Great Spotted Woodpeckers, Nuthatches, Long-tailed Tits and Jays, nowadays you can just see, with a bit of luck, Crested Larks, Stonechats, Sardinian and Dartford Warblers, Goldfinches, Linnets, Rock Buntings and Swifts pursuing insect in flight. In spite of this, good stands of cork oak can be found along the way and you will come across some scrub and isolated trees, mainly Canary Island pines and eucalyptus, which harbour long-established birdlife.

Both in Ojén and in Mijas you can enjoy the typical urban birds and in the cultivated areas you may be able to discover species which, possibly, have found here an environment closest to the pre-fire woodland.

In Ojén you will have an opportunity to see such urban-dwelling birds as Collared Dove, Pallid and Common Swift, Barn Swallow, House Martin, Spotless and Common Starling, House Sparrow, Black Redstart in winter and White Wagtail and Meadow Pipit on the outskirts of the village close to water. Very soon the first orchards appear, some of them including tropical fruit trees, and you can see the Common Blackbird, European Robin, Sardinian Warbler, Great Tit and finches such as Goldfinch, Serin, Greenfinch and Common Chaffinch.

The areas of scrub which follow next, the domain of Mediterranean dwarf palm, juniper, gorse and esparto grass, hold such species as Turtle Dove, Red-necked Nightjar, Bee-eater, Crested Lark, Common Stonechat, Song Thrush, Zitting Cisticola, Dartford Warbler, Melodious Warbler, Spotted Flycatcher, Woodchat Shrike and Rock Bunting. As Stage 32 continues, it crosses a stand of cork where you can also see Blue Tit, Nuthatch, Short-toed Treecreeper and Jay. Starting from the area called Cordobachina, the first signs of the past forest fires mentioned earlier are becoming visible. From this point, along a good stretch of the stage, the prevailing vegetation consists of sprouting Canary Island pines and eucalyptus trees which have survived the flames. In spite of the efforts to reforest the area, it will take years for the Great Spotted Woodpeckers, nuthatches and Long-tailed Tits inhabit the place again and to create stable populations.

Surprisingly, Booted and Short-toed eagles as well as Goshawks and Sparrowhawks continue to be seen here, also Green Woodpeckers and Golden Orioles are still heard around the streams. In spring of  2014 it was confirmed that a pair of Short-toed Eagles nested and reproduced atop a burnt tree. Similarly, a pair of Bonelli´s Eagle breeds along Stage 32, using a cork oak tree which has survived the 2012 fire.

The southern slopes of Sierra Alpujata and Sierra Blanca are good areas to see soaring birds on migration and one of the best viewpoints is located at the Cerrro del Pślpito, only a few metres away from The Great Malaga Path, not far from the “centro de tratamiento y rehabilitación contra la drogadicción” (drug addiction rehabilitation and treatment centre). The Additional Information section contains description of the site. The site also provides a chance to see the Eagle Owl, Raven, Peregrine Falcon, Black Wheatear, and, before the fire, the scarce Bullfinch used to be present during winter season.

The downhill section leading from the viewpoint has also been burnt; the track is lined with recovering Canary Island pines all the way up to the Entrerrķos area. In this area the river bed forms several pools which contain water year round and you will note how the diversity and abundance of birds is significantly higher compared to the previous part of the stage. Wood Pigeon, Turtle Dove, Cuckoo, Grey Wagtail, Common Nightingale, Cetti´s Warbler, Blackcap and Spotted Flycatcher appear, so does the Cirl Bunting and again Tits and Finches turn up, as they did at the start of Stage 32.

From this point to Sierra de Mijas you will come across gorse and broom scrub harbouring Sardinian Warbler and Dartford Warbler and species typical of open spaces. Ermita del Calvario chapel, surrounded by large stone pine trees, marks the arrival in Mijas. Walking down to the village again you can see birds which are typically found in populated areas.

A long part of this stage goes along a forest path up to the area of Enterrios. At the Colorado Port, it becomes steeper on its way to the Mijas Mountains, at the bottom of which is our target destination.