GR 249. Stage 31. Marbella - Ojén. The Pino port dominating the area of Puerto Rico and the Mediterranean

GR 249. Stage 31. Marbella - Ojén. The Hermitage of the Monks, in the Guadalpķn stream 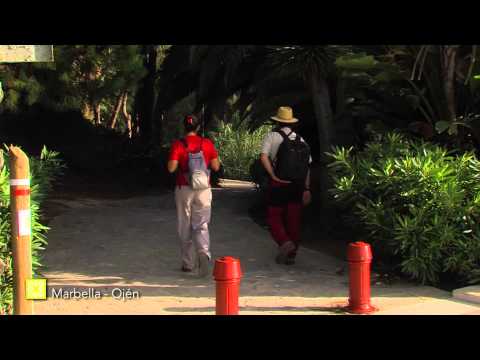 At the beginning of Stage 31, at the seaside, you can watch sea birds and coastal birds, together with river species at the stream mouth of the Arroyo Guadalpín. Next, you will be entering the urban sprawl of Marbella, where urban-dwelling birds are predominant. This continues until the tall buildings give way to lower structures surrounded by landscaped areas and an abundance of trees. This encourages the presence of typical forest birds, also because of the proximity of the Nagüeles pine wood. Once you have passed through the pine wood you will encounter stands of trees alternating with areas of scrub and bare rock continuing practically till the end of this stage.

At the beginning you can see gulls, whose abundance and the type of predominant species depend on the time of the year. In winter, the Lesser Black-backed and Black-headed Gulls are most common even though you can also find the Yellow-legged. The last named gull is more common at the end of spring and in the first half of summer. Northern Gannet and Sandwich Tern are also common during migration periods and winter season, so are the Sanderling, Common Sandpiper and other waders, such as Turnstone.  Mallard, Great Cormorant, Grey Heron, Little Egret and Cattle Egret can also be seen along the first section of Stage 31, as well as the progressively more common Monk Parakeet.

As you enter the built-up area, Common Kestrel, Eurasian Collared Dove, Pallid and Common Swift, Barn Swallow, House Martin, Common Blackbird, Black Redstart, Common Chiffchaff, Spotless and Common Starling, House Sparrow and Serin are the most common. When passing through the area of low houses and extensive landscaped zones, you will notice that both the Blackcap and the Sardinian Warbler turn up, also Great Tit, Coal Tit, Common Chaffinch, and other typical woodland birds. In the “proper” pine wood, where the savin juniper, wild olive and mastic form part of the undergrowth, you will be able see the Common Wood Pigeon, European Turtle Dove, Short-toed Tree Creeper, Goldfinch, Greenfinch, Serin, Eurasian Siskin and Crossbill, besides the already named birds.

The Nagüeles pine wood is an excellent place to see the Crested Tit, an easy to identify bird because of the tuft of feathers on its head. The bird has a black collar encircling its whole neck and if you are close enough you will notice the striking red eye colour. This species is much easier to hear than to see, however with a bit of patience you will end up spotting the bird, always accompanied by other individuals of the same species.

Past the pine wood the many ups and downs lead through a sequence of cols. Dense tree copses alternate with dolomite limestone zones where herbs and esparto grass rule. The European Robin and Bonelli´s Warbler nest around the streams where Song Thrushes and Redwings congregate in winter. Open areas are the domain of the Common Stonechat, Sardinian Warbler and Crested Lark, and this is a good moment to start paying attention to the sky for a very likely sighting of a raptor. Besides Common Kestrel, you can see Short-toed Eagle, Common Buzzard, Bonelli´s Eagle, Booted Eagle and Golden eagle, as well as Goshawk and Sparrowhawk. Other well represented species in the area are the Red-necked Nightjar, Little Owl, Bee-eater, Pallid and Common Swifts, which can form great flocks at the foothills of the sierra in search of food, plus the Red-rumped Swallow.

At certain points of Stage 31, such as around the open-air pyrite mines, you can find sites which harbour the Eagle Owl as well as wintering and breeding populations of Crag Martin.

Before the village of Ojén comes into view, at the outskirt villas, you will be walking through a mature pine wood where the already named forest species turn up again, together with the Tawny Owl and Scops Owl. Along the last section of Stage 31 in the shady areas with trees, such as the surroundings of the Arroyo del Tajo Negro, the scarce Iberian Chiffchaff nests, plus you will be able to spot the Long-tailed Tit. Same environment holds European Robins year round, and one or two Hawfinches might make an appearance.

From the golden beaches of Marbella, uphill to the Town of Ojén and through pine forest of Nagüeles in the Sierra Blanca mountains, this trail continuously goes up and down, and around Concha (Shell) Peak, from which the Rock of Giblartar can be made out.