GR 249. Stage 27. Benalaurķa - Genalguacil. The path next to the Genal River in one of the abandoned orchards GR 249. Stage 27. Benalaurķa - Genalguacil. The walkway of the Vega de la Estacį over the clean waters GR 249. Stage 27. Benalaurķa - Genalguacil. The hedgehogs of the chestnuts starting to open GR 249. Stage 27. Benalaurķa - Genalguacil. The town of Genalguacil, final destination of the Path GR 249. Stage 27. Benalaurķa - Genalguacil. El Genal is an excellent area for wild mushroom picking, such as this boletus GR 249. Stage 27. Benalaurķa - Genalguacil. Mix of colours in the thickets of riparian vegetation of the Genal 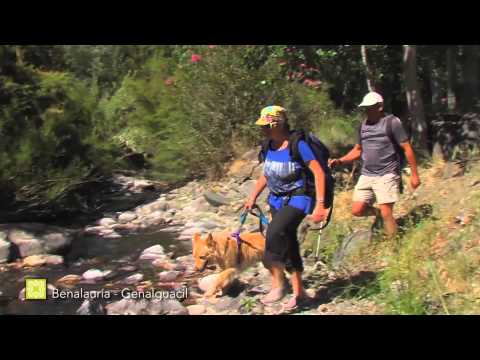 This stage gives you the opportunity to train your ear and in this way deepen your relationship with birds. Although you will be able to observe directly a varied sample of typical forest species, such as raptors, woodpeckers and many passerines, there is a significant number of species typical of woodland environment which are easy to hear and very hard to see. Also, what seems to happen quite often is that there is always a twig blocking the view of your target species. The section following closely the riverbed will provide an opportunity to become familiar with the bird community living in direct contact with the water.

Forest species are the stars of this stage. There are also birds characteristic to urban environments at the beginning and the end of Stage 27, and species typical of rivers and river banks. As you take the first and last steps of this route, Sparrows, Barn Swallows and House Martins will remind you that you are close to inhabited areas. As you set off on the walk and the first trees appear, you are more and more likely to see the Spotted Woodpecker, Green Woodpecker, Common Wood Pigeon, European Turtle Dove, Wren, European Robin, Song Thrush, Stonechat and Redwing, Common Blackbird, Blackcap, Sardinian Warbler, Bonelli´s Warbler, Iberian Chiffchaff, Black-eared Wheatear, Great Tit, Blue Tit, Nuthatch, Short-toed Treecreeper, Common Chaffinch, Goldfinch, Greenfinch, Serin, Hawfinch and Cirl Bunting.

Once you are at the river you can see and / or hear Common Sandpiper, Wryneck, Kingfisher, White and Grey Wagtail, Nightingale, Cetti's Warbler, Reed Warbler occurring in the few open spaces with reed beds and Golden Oriole in the canopy of large trees. Birds associated with built-up areas along the way may include Common Kestrel, Little Owl, Red-rumped Swallow and Blue Rock Thrush.

The community of birds of prey is highly interesting here since you can see both the typical forest raptors (Short-toed Eagle, Booted Eagle, Common Buzzard, Northern Goshawk and Eurasian Sparrowhawk), as well as birds associated with rocky cliffs that tower over the valley, from Sierra Crestellina and Hacho de Gaucín, to the Benadalid cliff (species such as Griffon Vulture, Bonelli's Eagle and Peregrine Falcon are relatively common if you pay attention to the sky).

If you walk any section of Stage 27 at dusk or at dawn, you can enjoy the call of such crepuscular species as the Eagle Owl, Scops Owl, Tawny Owl and Red-necked Nightjar.

All the way from the Town of Benalaurķa up to Genalguacil, which lies over a steep terrain while its white houses shine in the middle of the forest, you will be surrounded by chestnut trees, decorated with green colours in spring and summer, and ochre and red shades in autumn.