GR 249. Stage 16. Cuevas Bajas - Alameda. The sea of olive trees and the dry land of Antequera from la Sarteneja GR 249. Stage 16. Cuevas Bajas - Alameda. El Cortijo de Camilla, one of the first large farmhouses, which you pass on your right GR 249. Stage 16. Cuevas Bajas - Alameda. One of the traditional farmhouses that the road leaves next door, with the Peńón de los Enamorados in the background GR 249. Stage 16. Cuevas Bajas - Alameda. Panoramic view of the expanse of crops where the dry farmland and olive groves alternate at the beginning GR 249. Stage 16. Cuevas Bajas - Alameda. The first hill overlooks the village of Villanueva de Algaidas and the valley of the river Burriana 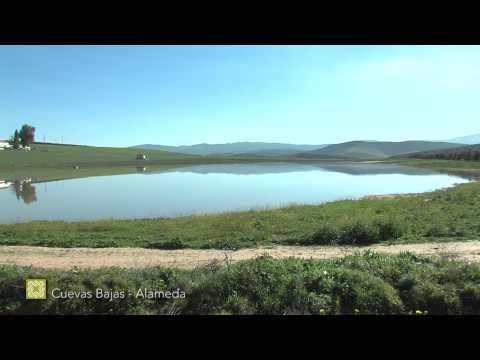 The first steps of Stage 16 take you along the stream Arroyo de Barranco Hondo and very soon the path enters an olive grove again, which will keep you company, alternating with a patchwork of dry crop farmland, till the end of this stage. Close to the Cortijo de la Sarteneja you will find seasonally flooded areas which, when they contain water, support waterfowl species providing contrast to the type of birdlife seen so far. Once you cross the motorway (A-45) you will enter the mix of olive groves and grain fields again and a small island of a holm oak wood which adds to the diversity of birdlife. The final section leads through an olive grove which is only interrupted by the appearance of the typical farmhouses of the area.

Swallows and House Martins, together with Starlings, Sparrows and increasingly common Eurasian Collared Dove are probably the first species you will see; however the fact that there is a stream at the very beginning of the walk will cause your bird list to grow considerably. Close to the river more birds appear, such as Nightingale, Stonechat, Cetti´s Warbler, Sardinian Warbler, Great Tit, as well as finches typical to this part of Stage 16 (mainly Goldfinch, Greenfinch and Serin). Even though this is a river environment, the domestic variety of Rock Dove breed under the low bridge you will be crossing and they fly out as you walk past. At this point you are entering an olive grove and the most common species become the Red-legged Partridge, European Turtle Dove, Hoopoe, Crested Lark, Song Thrush, Common Blackbird, European Robin, Blackcap, Common Chiffchaff, Great Tit, Azure-winged Magpie and Corn Bunting, together with the previously mentioned birds. In spring you can also find Bee-eaters and the three species of Swifts most frequently seen in the province (Pallid, Common and Alpine), these birds use the areas above watercourses to find food.

You can also see large raptors such as Short-toed, Bonelli´s, Booted and Golden Eagle, drawn by the presence of prey, as well as Common Buzzard and Common Kestrel; in spring and summer you can find Montagu´s Harrier, a species which breeds in the surroundings of the path.

Once you reach Barranco Hondo, you will walk past, on your left, a patch of dry farming land (mostly cereal or chickpeas, depending on the time of the year) which represents a steppe environment in the province; here you can see the Montagu´s Harrier, Lesser, Kestrel, Stone-curlew, Little Bustard, Skylark and Calandra Lark. Other species occurring in the area are Common Kestrel, Barn Owl, Little Owl, Eagle Owl, Red-legged Partridge, Quail, Zitting Cisticola, Woodchat Shrike, Raven and, however it is very uncommon, you might be able to see the scarce Black-bellied Sandgrouse. In spring and in June you will be able to see Gull-billed Terns which spread out from Laguna de Fuente de Piedra looking for food.

In the wetland at Cortijo de La Sarteneja flocks of Mallard and Coot gather in winter. You can also see Little Grebe, Grey Heron, Moorhen, Mallard, and Golden Plover in winter, and even Greater Flamingos.

Although the rest of Stage 16 leads through an olive grove, it is the area just after the Cortijo de La Capilla which, during breeding season, harbours a population of the scarce Rufous-tailed Scrub Robin. The existence of a holm oak formation favours the occurrence of typical woodland passerines in the area such as Great Tit, Woodchat Shrike and Common Chaffinch. In winter Common Buzzards gather around here, probably coming from the north, and it is not uncommon to see the Northern Harrier, Red Kite and Merlin.

All around nothern Antequera, this bandy path goes through extensive land of olive trees, covered in farms or ranches, such as Pajariego or Sarteneja. At the bottom of the latter one, there is a broad lake with the same name that shelters plenty of water birds species.