GR 249. Stage 13. Archidona - Villanueva de Tapia. Toward the middle of the Stage Holm oak dehesas and Sage-leaved Cistus dominate alongside the trail GR 249. Stage 13. Archidona - Villanueva de Tapia. This Stage allows for gazing anew from some of its hillocks over the grey crests and woodlands of the previous Stages GR 249. Stage 13. Archidona - Villanueva de Tapia. This traditional path is used by many hikers, cyclists and horse riders that cross the dehesas

GR 249. Stage 13. Archidona - Villanueva de Tapia. At the beginning of this Stage you’ll pass close by the Fuente de Sacristan spring, which is very important for the walkers in Archidona GR 249. Stage 13. Archidona - Villanueva de Tapia. he gully caused by this stream in the olive grove, allows you to see a cut into the soil, showing layers of different particles 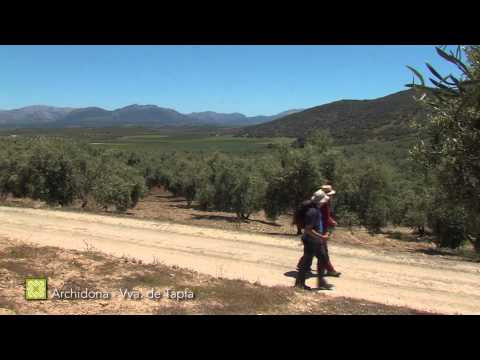