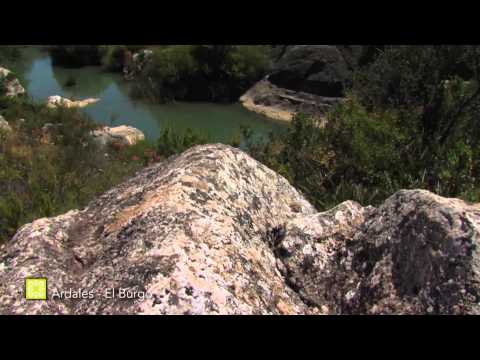 The beginning of stage 22 around the Río Turón constitutes a seasonally flooding area which can hold a great number of water birds. Almost as soon as you set off along the path you will move away from the river bed and pass through grain fields, which then give way to a mature pine wood within a few kilometres.  Juniper and a fine scrub prosper underneath the tallest pines. During the whole stage you can make out the shapes of high mountain peaks in the distance, from the summits of Sierra Huma at the beginning to the Sierras de Alcaparaín, Ortegícar and Prieta along the footpath. This section of the Great Malaga Path marks the beginning of the mountainous stages where sierra bird species again make an appearance. Once you reach the maximum height of this stage where pine trees are joined by holm oaks, grain fields will be the predominant landscape again, with species of birds favouring open spaces. Getting closer to El Burgo you will mainly see orchards and vegetable plots and with the addition of a few streams the task of birdwatching here is quite entertaining.

In Ardales, specifically around the river, you will find the typical urban dwellers such as Pallid Swift, Spotless and Common Starling, Barn and Red-rumped Swallow, House and Crag Martin. These species visit the river to feed on insects and to drink water; flying low they stick just their lower mandible in the water with a precision down to a millimetre. Such a big concentration of these birds gives you a good chance to spend some time watching if you are not sure how to indentify them. From the bridge itself and underneath it, you will have a chance to see Mallard, a few Cormorants and waders such as Little Ringed Plover and the slender Black-winged Stilt.

The presence of a patchwork of grain fields and olive groves, and a small wood of holm oak at the beginning of stage 22, favours diversity of species which, as you will be able to notice, is very high. Red-necked Nightjar is abundant in the area, Hoopoe, Crested Lark, Common Nightingale, Black Redstart, Common Stonechat, Common Blackbird, Zitting Cisticola, Cetti´s Warbler, Sardinian Warbler, Blackcap, Common Chiffchaff, Firecrest, Spotted Flycatcher, Great Tit, Woodchat Shrike, Golden Oriole, Goldfinch, Greenfinch, Serin and Corn Bunting are the most commonly occurring species. Around the castle, Castillo del Turón, you may startle one or two Little Owls perched on a pile of rocks, as well as the Blue Rock Thrush or the Eagle Owl in the castle itself.

At the transition point before entering the pine wood, Red-legged Partridges are common and once you are surrounded by trees, the presence of Coal Tit indicates the type of wood you are walking through. This pine wood also harbours Booted Eagle, Eurasian Sparrowhawk, Great Spotted Woodpecker, Common Blackbird, Song Thrush, Sardinian Warbler, Blackcap, and Southern Grey Shrike in open areas, Eurasian Jay, Common Chaffinch, Crossbill and Common Linnet, among other species. Having reached about 800 metres above the sea level, Blue Tit and Spectacled Warbler indicate the presence of holm oak and scrub. If your target species are large raptors, Stage 22 provides good sites especially that it runs through borders of different habitats.

An occasional look at the sky and scanning the high ridges with your binoculars could produce sightings of Golden Eagle and Bonelli´s Eagle as well as individuals of Griffon Vulture.

This part of the route offers a perfect mixture of history and nature. The path is rather flat and it goes across
olive trees fields, through pine woods, and afterward it stretches from the bottom of Turón Castle to the Town of El Burgo, home of a beautiful track along the river