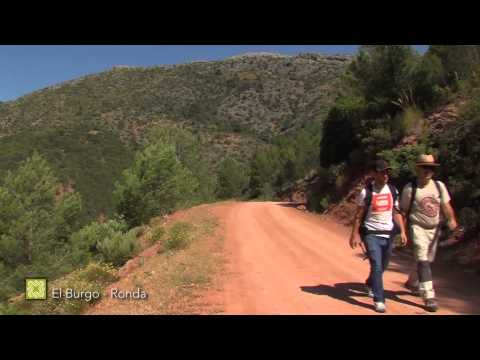 Stage 23 starts in the centre of El Burgo, and inevitably the first species you see are associated with this type of environment. Within about 300 metros you will encounter Río Turón, which you will be then following for a large portion of Stage 23. The presence of crops on one side and riparian vegetation on the other, results in an interesting mix which translates into a high diversity of species. As you keep walking, the vegetation turns into woodland, and steep slopes start appearing, clearly influencing the type of predominant species.  The pine wood will keep you company until the patch of terebinth in Lifa valley. Past the Lifa farmhouse you will be crossing a very interesting low mountain area. The climb comes to an end in a wooded area with holm oaks. This allows you to watch forest species before entering the flat farmland which leads to Ronda.

In El Burgo, the beginning of this demanding Stage is marked by such species as Eurasian Collared Dove, House Martin, Spotless Starling and House Sparrow. However, given the type of the village surroundings, it is not uncommon to see rock-dwelling or forest species flying overhead from the first step you take. At the very beginning you will encounter the river and sizeable riverside vegetation which promotes the presence of quite diverse species at this first section of the walk, such as, for example: Mallard, Hoopoe, Great Spotted Woodpecker, Wryneck, Barn Swallow, House Martin, White and Grey Wagtail, Common Blackbird, Stonechat, Nightingale, Blackcap, Spotless Starling and Short-toed Treecreeper.

The presence of olive groves results in the appearance of such species as Great Tit, Common Chaffinch, Goldfinch, Greenfinch and Serin. From the very beginning of Stage 23 you need to pay attention to the sky looking for bird silhouettes, which could turn out to be Eurasian Sparrowhawk, Northern Goshawk, Common Buzzard, Booted Eagle, Short-toed Eagle and Common Kestrel. Once the path enters a pine wood and is still close to the river, the community of forest birds becomes more evident and such species occur as Mistle Thrush, small flocks of Long-tailed Tit, Nuthatch and Eurasian Jay.

At the same time steep rock faces start taking over the terrain and thus Swifts, Crag Martins and Blue Rock Thrush turn up. An evening walk along this section will allow you to hear at least three nocturnal birds of prey (Eagle Owl, Tawny Owl and Scops Owl. During the day large raptors tend to fly along the Río Turón valley. Such species as Bonelli´s Eagle and Peregrine Falcon find welcoming spots around here and establish their territory, whilst the Griffon Vulture is a frequent visitor.

Once you abandon the track and walk down to the river El Burgo, past a large holm oak the pine wood becomes richer in lentiscs, more holm oaks and first terebinth bushes. This is an area where, amongst some of the already named species, there is a great abundance of birds in the thrush family in winter. There might be up to six different species if you include Common Blackbird and Ring Ouzel. Although it is the Song Thrush which is the most abundant, you can also find Mistle Thrush and Redwing, and even the scarcest of them, the Fieldfare.

Walking past rock faces on your right note the Griffon Vulture roosts which may become breeding spots in the future if the species continues being on the rise. Once you reach the top of the climb, facing the Lifa tower and farmhouse, you will next enter a glen dedicated to farming, where in winter Meadow Pipits and Skylarks are common, with the year round presence of Crested and Thekla Lark, Common Stonechat, Zitting Cisticola, Goldfinch, Common Linnet and Corn Bunting. In the surroundings of the cortijo you will walk through several gates which you should leave as you found them. These gates are used to control livestock and you would not be doing anyone a favour if you forgot to close the gates, closed them incorrectly or decided to close a gate which you had found open (please keep in mind that an open gate is also performing a certain task).

At the farmhouse you will be entering an area of low thorny scrub where, if you take your time, you can end up watching to your heart´s content the Dartford Warbler, sharing the common range with the Sardinian Warbler.

Both species are joined in spring and summer by Spectacled Warbler plus Subalpine Warbler, Garden Warbler and Whitethroat in migration periods. Combined with the fact that Blackcap is frequent in winter and the patches of holm oak in Puerto de Lifa hold breeding Western Orphean Warbler, you could say that this part of Stage 23 harbours practically all of the Sylvia warblers which can be seen in the Spanish Peninsula.  A similar situation occurs with wheatears, since the Black and Black-eared Wheatear nest along this section of the path, and Northern Wheatear turns up on migration.

Worth adding to the bird list is the Cuckoo, occurring in the holm oak woods, a bird you will most definitely hear in spring but which can rarely be seen, and the Woodlark with its melodious song, the only representative of the Alaudidae family breeding in forest areas. The forest environment which you encounter before arriving in the Aguaya flatlands brings back the species you have already seen at the beginning of Stage 23.

Entering the farmland immediately translates into the appearance of high numbers of larks, Stonechats, Zitting Cisticolas and Corn Buntings. If you happen to be doing this walk in spring and arrive in Ronda at dusk, you will have a chance to see the crepuscular flights of the Red-necked Nightjar, a bird which has a persistent tendency to settle on the road.  As always, the Eurasian Collared Dove, Starlings and Sparrows indicate that you are approaching inhabited areas, in this case Ronda.

Now you will walk through a dense pine wood along the River Turón until you see a steep path to Lifa Valley,
which encircles the ruins of a watchtower over a chalky promontory, where its plant life turns into holm oaks and turpentine trees.